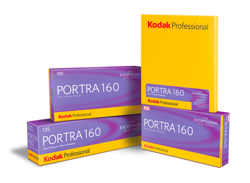 Don’t forget that The Darkroom can develop any type of film. Lean more about our Kodak Professional Portra 160 Film Developing.