Shopping for a film photographer can be difficult, so here are three gift ideas someone who shoots film would love!

We recommend older vintage cameras like a Nikon FM or a Canon Canonet, both of which you can get for a decent price. When it comes to film cameras there are many other options and we highly recommend checking out KEH.com!  Not only do they sell a wide range of film cameras but they’ll also help you pick out the perfect gear.

You could buy them some of their favorite films or buy them less common or more expensive film stock they might not buy for themselves.  When it comes to film we recommend the Film Photography Store which sells a wide range of film!

Third, this is where we come in – Film developing

You could help them get their film developed, scanned, and even printed by getting them a Darkroom gift card which will be sent directly to them.

On top of that – gift-card purchases over $50 will come with a free Darkroom desktop 2021 calendar and if you go higher than $75 you’ll not only get the calendar but also our Darkroom tote bag! 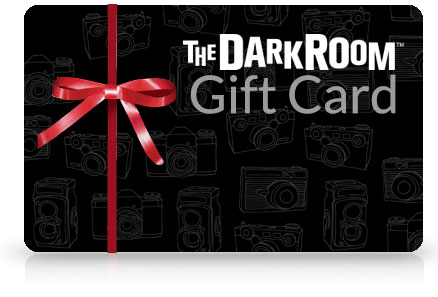 E-Gift cards are emailed to the recipient on your behalf.
Purchase now, have it delivered with a personal message at a time of your choosing… thoughtfully easy!
Get a Gift Card

Great advice Trev on gift ideas. I’m looking at getting back into film photography. Majored in Photo back in the early/mid sixties and because of Vietnam never got to pursue it further. Wanted to go to Brooks Institute (now sadly closed), but life just got in the way. Looking at KEH for a 35mm. Noticed you like the Nikon FM (possibly out of my price range). Wondering what you think of the Asahi Pentax Spotmatic F or the Olympus OM-1, Or the Nikon FE. In addition, I would like to pick up the Rollei 35S for candid shots and easy portability. I have years of studio and darkroom (B&W) experience but have been looking for a company like yours for film, processing and lab work.
Thanks for your reply!
Jack

I was studying photography in the late 60s. I would have liked to go to Brooks or Art Center but I didn’t earn enough money to pay for those schools. So I did the 2 year Associate in Arts degree at Los Angeles Trade Tech College. The emphasis was on commercial photography. Although all of us poor photo students had fantasies about National Geographic, Vogue, Sports Illustrated. Those of us who did make money as photographers shot weddings and portraits of various types.

I already had an established job in the commercial printing industry. I worked in the photolithograpy end of it. I operated large copy cameras and used ortho film. I never made much money as a photographer and I always enjoyed it. And in those years, there was always plenty of photolithography work in Southern CA.
Back then few women operated copy cameras and there weren’t many women in commercial photography classes. Two semesters I was the only female in my photo classes.

These days I still have my collection of film cameras and I also have a digtal camera. It is good to find “The Darkroom” to process film because where I live right now, I can’t set up a personal darkroom at home

Hey Hack I can highly recommend the OM1. I bought mine in 1978 and it is still going strong.

Jack I have an OM1 kit in great shape that I don’t use anymore. I’d love to see someone use it if there’s a way to get it to you!

I find it curious that some people will pay almost $10,000 for a new Leica Monochrome camera with lens to shoot b/w. Or use a regular digital camera to shoot color photos then convert them to b/w with Photoshop. Why use that modern equipment to pretend to shoot old-fashioned b/w? I bought a 70-year old Leica IIIc and loaded it with Tri-X to do vintage the right way! The photos from my IIIc might not be as technologically ‘perfect’ as with b/w digital conversions, but I think that is part of the charm. It is like old vinyl records vs soulless digital recordings, in my opinion.

Good for you! I don’t remember the exact model Leica you acquired but I always admired Leicas. I just couldn’t afford them back then.

I found a clean Speed Graphic 4 x 5 press camera at a yard sale. Me not being a shrewd buyer praised the camera so much that the seller decided he wanted to keep it after all. Damn!

I meant to say that I recently found the Speed Graphic at a yard sale.

I love the Nikon FE. It is just perfect.

Love the Darkroom T-Shirts and wear all 3 of mine regularly, wish you had those as an option this year! But I’ll also take some Portra 800 and FP4, thanks Santa!

December 2011, my wife has been trying to persuade me to go DSLR; but when I found that her budget was a Canon T3i, I talked her out of it. As a consolation, I bought a used Canon 28mm f2.8 from B&H for my Canon A-1. In 2013, I also bought a complete Canon New F-1 setup from KEH with the AE Finder FN, AE Motor Drive FN, with spot and partial metering screens (although that was in July). She asked if that was their flagship camera and I answered “Yes, for the 80’s” and she said “Buy it.”