Love film? This much?

Dabe Alan uses time lapse video to capture the creation of his geeky analog camera and film tattoo. Maybe we’re biased, but we need more people like him 😉 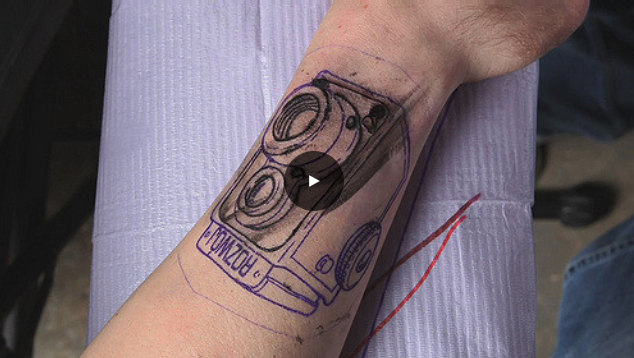 So with the help of Tony Touch, I am getting an awesome Nerd sleeve worked on whenever I go visit Toledo. We decided to roll with an evolution of cameras at first, then more nerdy references above. Tony got the idea from another artist to do a stop-motion video where it looks like the tattoo does itself. I brought in a single alienbee and softbox, plus my handy new remote, and we got to it. Hopefully we’ll do this for the entire arm. I’d love to have that kind of record of progress on this :)Since everyone is asking, some things about the tattoo:

-The actual time of the sitting was 4 hours

-This video is comprised out of 1054 shots

-“ROZWÓJ” is Polish for “development”

-Yes, the film is 35mm, but it’s not going into any of the cameras, just wrapping around. I’m well aware that it looks odd having it next to medium format cameras, but it will make sense when the rest of the sleeve is completed. 🙂