If you shot film regularly, it’s likely you’ve already had a double exposure accident, but with some forethought, create unique and artsy imagery by adding double exposures to your shooting repertoire.  A double exposure is exposing the film twice with two different images and can be easily done on your Holga, Diana, and other toy cameras by simply not advancing the film. There’s even a hack to do double exposures with disposable film cameras.

There’s no right or wrong way to create a double exposure, but here are some tips and different techniques to consider:

Film Trading Groups – There are groups set up for swapping film. A person buys a roll of film, shoots it, then rewinds it, then it’s traded for someone else to shoot, or double expose the film and then process it. To give it a try or see the results, A Tale of Two Cities is a popular Flickr group that swamps film. 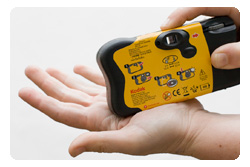 Great tips. Just getting to grips with this with my X-E1 and appreciate the pointers.