The Advanced Photo System (or APS) was introduced in 1996 as an alternative to or even as modern replacement for the 110 format.

The “IX240” film cartridges are optimized for fully automatic film load, enclosing the 24mm wide film completely when not in use. When developed, the film is even put back into its cartridge and returned to the user after it has been developed.

The film is housed in a single-spool 39 mm long plastic cartridge and was available in 40, 25 and 15 exposure lengths. The film surface has a transparent magnetic coating, and the camera uses this information exchange (IX) system for recording information about each exposure. The camera handles winding and rewinding automatically. The slot is protected by a light-proof door and partially exposed films can, in certain cameras, be removed and used later.

Unique to APS, the developed APS film is stored in the original cartridge,  which guards the film against dust, fingerprints, and damage. Every roll of APS film has a six-digit ID code on the label, which is also stored magnetically and is visible on either end of the processed negative. This ID is usually printed on the back of every individual print. This ID was designed to be an additional convenience both for the photo processor (who can easily match each strip of processed film with its cartridge and each cartridge to a particular customer’s order) and for the consumer, who can easily locate the correct cartridge if reprints are desired.

Aside from APS being easy to with fully automatic cameras, the main selling point was the ability to choose three print sizes or image formats: 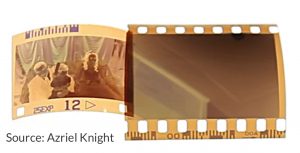 The Classic and Panromaic aspect ratios were accomplished with just cropping in on the images. One of the disadvantages of APS film was the film size, which was about 60% smaller than 35mm film. Also many film labs needed specialized developing equipment.

Most APS cameras (with the exception of some disposable cameras) can record all three formats; the format selection is indicated on the film by a series of exposed squares alongside the image area or recorded on the magnetic coating depending on the camera. In the absence of an operator-specified format, the machine printing an APS roll will use these indicators to determine the output format of each print.

The film is 24 mm wide (just a little under one inch) and the frame is 16.7 x 30.2 mm (approx. 5/8 x 1 1/4 inch). Note the two perforations per frame (35 mm has 8), and the barcode which tells the printing machine the frame number (such codes are used on 35mm as well). The APS-specific transparent magnetic coating that carries the PQI information can’t be seen, naturally. Many cameras sense the position of the film optically, using infrared LEDs to “see” the perforations. If you put a developed film (which is transparent, as opposed to an undeveloped one) into such a camera, it will generate an error message – the Elph/Ixus displays an “H”, and has to be reset by removing and replacing the battery.

Developed for zoom cameras and for freezing action shots, Kodak’s Advantix 200 film features T-Grain Emulsion technology that produces finely grained color images in low-light situations or where the extended flash range is necessary. Kodak Advantix 200 is scratch resistant and features drop-in loading and an automatic reject device that prevents inserting exposed or processed film, reducing the risk of double exposures. Get great pictures in sunlight or low light, action or still, with this versatile 200-speed film.

Kodak Advantix film features T-Grain Emulsion technology for excellent performance in low-light situations, or where the extended flash range is necessary. It’s perfect for capturing fast action and is great for zoom cameras.

Negatives are returned inside the film cassette for easy storage, and index prints make it easier to reorder. An electronic charge stabilization agent provides better raw stock keeping, reducing the risk of color shifts as the unexposed film ages, and minimizing the effects of high temperature and humidity on the performance of the films.