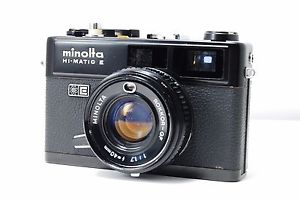 Hi-Matic was the name of a long-running series of 35 mm cameras made by Minolta. The original Hi-Matic of 1962 was the first Minolta camera to feature automatic exposure and achieved a small degree of fame when a version (the Ansco Autoset) was taken into space by John Glenn in 1962

The Hi-Matic E of 1971 was a much-improved version of the C with a 40 mm f/1.7 lens and a rangefinder. It used the same Electro Control automatic exposure system found on the Yashica Electro cameras. The E was followed by a succession of increasingly inexpensive models, the Hi-Matic F in 1972, the Hi-Matic G in 1974, and the Hi-Matic G2 in 1982. The Electro Control system was abandoned after the F in favor of a simpler system.