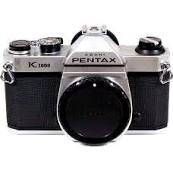 With the renewed popularity of film photography, a question we get regularly is what’s a good film camera to learn on. With rare exception, the answer to that question is the Pentax K1000 and it’s widely known as the film camera for beginners.

The Pentax K1000 (originally marked the Asahi Pentax K1000) is an interchangeable lens, 35 mm film, single-lens reflex (SLR) camera, manufactured by Asahi Optical Co., Ltd. from 1976 to 1997, originally in Japan. The K1000’s extraordinary longevity makes it a historically significant camera. The K1000’s inexpensive simplicity was a great virtue and earned its unrivaled popularity as a basic but sturdy workhorse and a great camera for beginner photographers.

The Pentax K1000 is a popular camera that was produced from 1976 to 1997 and it’s still easy to find. The K1000 is popular among photography students and new-coming amateur photographers because of its minimal features, making it simple to use and a good film camera for beginners. The all-manual operation and minimalist features include the ability to control shutter speed and aperture.

What Film to Use?

While there are many different film options, one of the best to start with is Kodak Gold 200. It’s commonly found and great for many daylight situations. The ISO for this film is 200 (ISO is the film speed), which will be used when loading and setting up the camera. Lower speed films (like 100 or 200) have a finer grain and typically have better quality, but can blur the subject if it’s in motion. Generally, higher film speed is used in lower light conditions and lower film speed is better for shooting in brighter light.

To set the film speed on the camera, lift the outer ring on the shutter speed dial and rotate the dial until the number matches the speed of your film.

Adjusting for the Best Exposure

It’s recommended that you keep your shutter speed at 60 or higher.
Shutter speed less than 125 can be used with a flash and would mean a longer exposure time and more chance of blur if a flash is not used.