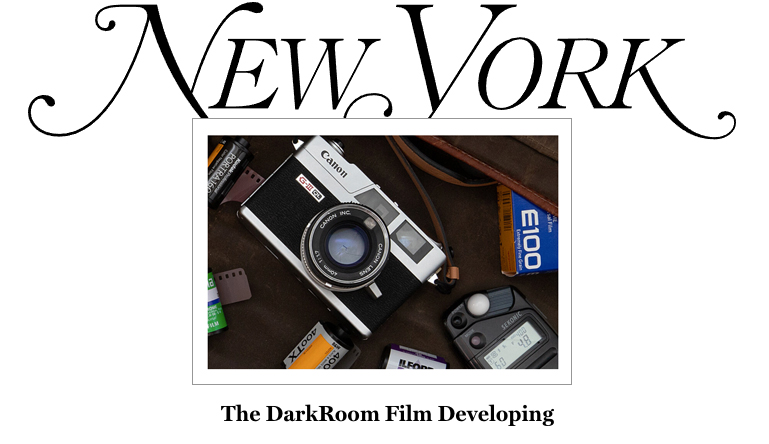 New York Magazine recently featured The Darkroom in The Strategist section. Below is an excerpt from that article.

Digital photography may be more popular than film, but over the last few years, entire Instagram pages and YouTube channels have been created that are dedicated to taking pictures the old-fashioned way. Channels like Negative Feedback, along with those from Corey Wolfenbarger, Joe Greer, and Willem Verbeeck, have become online havens for budding film enthusiasts. But one thing a lot of them don’t address is where to send your film to be developed. “Film is delicate and it’s so important to work with a trusted lab for developing and scanning,” says Wesley Verhoeve, a photographer and curator. “It’s already quite expensive to shoot film, so the last thing I’d want to happen is to have that investment of time and money be ruined by shoddy lab work.”

It all comes down to who’s operating the machines and processing the film, says Kyle McDougall, a professional photographer and host of the film-photography podcast Contact Sheet. “You could send it to 20 different labs and you could get 20 different-looking images or scans back,” he says. While you can still get film developed at places like Walgreens and Walmart, almost every expert we spoke to says you’ll get much better results at a professional lab. Wolfenbarger, a photographer and one of the aforementioned film-loving YouTubers, says it’s a night-and-day difference between using a professional online photo-development service and cheaper services. “Not only do they have better machines to process the film and scan the film, they also often will have people that are very passionate about photography,” he says. Having someone that understands photography is especially important when it comes to scans, the digital files you will get after your photos are processed, because they get how lighting, color, and contrast can affect your photos.

…Online-only film labs like DarkRoom tend to be “cheaper in the price of developing and scanning,” says Sissi Lu, another co-creator of UnderDVLP. And that’s including shipping costs, since, she says, “you usually only have to cover one-way shipping and they ship the negatives back to you for free.” Although you’ll have to wait a little longer because of shipping, and it might be a little scary to drop your film in the mail and hope it gets safely to its destination, Lu says it’s still a better option than a local nonprofessional lab. “Comparing a professional online lab to a local pharmacy, I will choose the pro labs over pharmacies without any hesitation. In my opinion, it’s better to anticipate the wait time than risking potentially ruining the film,” she says. Lu also appreciates DarkRoom’s educational offerings. Its Instagram is filled with tutorials comparing different film stocks, she says, covering how pushing and pulling (a technique used to add contrast to low-light situations or take away contrast and give more details to shadows) works or how different lenses can change the way a photo feels and looks. Derek Brooker, another co-founder at UnderDVLP, is also a fan. “I have used DarkRoom and absolutely loved the stuff I got back. They send you a little mailer so all you pay for is the postage and they send you the scans back right away,” he says.