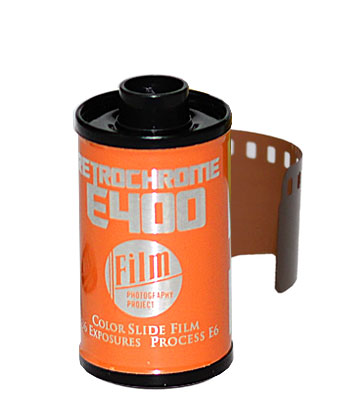 RetroChrome is government surplus High Speed Eastman Ektachrome color positive film. Made for industrial and governmental applications, Kodak adds “it is color reversal camera film that is intended for photography under daylight illumination. Among its many applications are news photography, sporting events and industrial photography.” The film is cold-stored 2004 expired. The film performs excellent at it’s intended box speed of 400 iso which leads us to believe that this film has been stored in the “deep freeze” for the past decade. Read all about RetroChrome history in our RetroChrome blog!

Excellent film with washed colors! Advice: if you shoot it a box speed, it will be underexposed, so you will have to do a little “genteleman’s post-adjustment” (i.e. set the black point). My advice to meter it to a half-stop-ish below box speed and you shout be good without adjustment.

I truly enjoyed shooting this 400-speed chrome film. The 400 ISO offers more flexibility with exposure options, the grain is not overwhelming and the subdued vintage colors are unique.

Not at all what I had expected.

I bought two rolls of this film before I’d seen any sample images expecting the kind of vivid colors and saturation of Provia, Velvia, or Ektachrome 100, just with better performance on overcast days. Instead what I got was what looks like the photos I was taking with drugstore film on point and shoot cameras back in the 90s. Grainy, washed out colors with grey shadows devoid of detail. It’s a look to be sure, but not at all what I had expected and more expensive than just throwing some el cheapo film in a budget used camera and going to town.