How to Create Double Exposures on Film

Portraits layered over mountain ranges, flowers dotting the contents of a coffee cup, a cityscape rising from the ocean. The possibilities for creative captures are limitless when you dive into the world of double exposures. While they may seem intimidating at first, film double exposures are not as complicated as you may think. Here are some tips about how to capture a great double exposure on film!

Not all cameras can shoot double exposures. Some older, fully manual cameras allow you to stay on the same frame between shots making it very easy, but other cameras have to be “tricked” into doing so. To keep it simple, we recommend getting a camera that has a dedicated setting for multiple exposures. Unsure if your camera can shoot double exposures? Do a quick Google or YouTube search on your camera’s specs and you should be able to find out quickly.

If your camera does not have a multiple exposure setting, you’ll shoot the entire roll (first pass),

The only trick with this technique is being careful to align your second set of frames. Use a marker to mark the film’s position at the mouth of the cartridge. This will let you know that you shouldn’t pull your film beyond this line when you reload the film for the second pass. Also, keep your first set of images in mind. It’s a lot to remember so you may want to take notes of the images you shot

For the best double exposures, we suggest using black & white or color negative film as they have good exposure latitude which means they handle over-exposure well, making metering much less intimidating. Between the two, we highly recommend black & white since its lack of color simplifies overlapping images and has the best exposure latitude. While you can capture double exposures on E-6 slide film, you will need to pay very close attention to your metering since it has less exposure latitude and is much less forgiving when overexposed.

For most people, metering correctly is the most intimidating aspect for double exposures. The good news is, with the right film selection you can pretty much meter normally without blowing out your photos. Yes, a double exposure literally means you’re exposing the frame to light twice so you’ll want to underexpose by cutting the exposure in half, so the double-exposed shots equal out to a fully exposed image.  With that being said since black & white and color negative film do so well with overexposure you’re still likely to get great results if you shoot each exposure normally.

The best way to master metering for double exposures is simply to go out and try it. In the end, it all depends on the results you want and the framing of your shots. Keep this in mind: anything that is white/bright will destroy information and anything black/dark will maintain information for the next exposure.

Anything that is white/bright will destroy information and anything black/dark will maintain information for the next exposure.

There you have it. All it takes to start capturing some amazing double exposures on film is the right camera, some forgiving film, careful metering, and a creative eye!  Below are some double exposure examples with some insight on how they were created.

If you’re just starting out, try pairing silhouettes with patterns. Try pairing a silhouette portrait, interesting shadows, or a dark object with foliage, a mesmerizing sky, or city skylines. 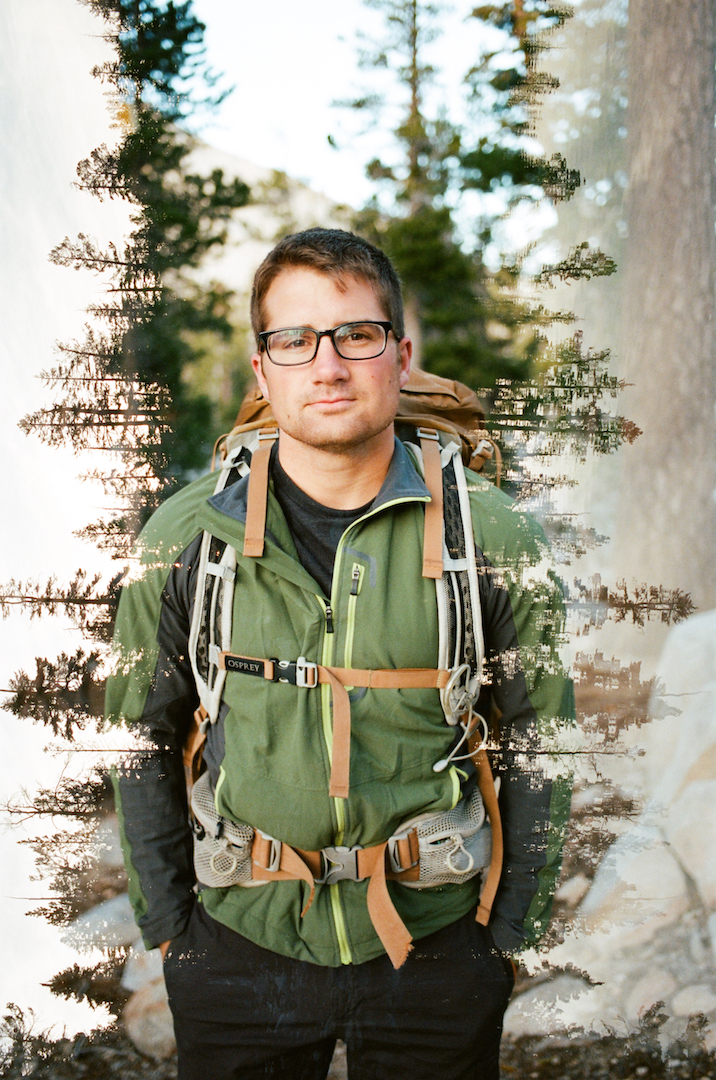 The landscape was taken first and was metered for the highlights and the portrait was taken 2nd and was metered for the skin tone. Since the evenly exposed skin tones overlapped with the dark shadows of the first shot the portrait shows really well. If you want to see the features in a double exposure portrait you should evenly expose the skin tone and overlap it with the dark part of the first exposure. 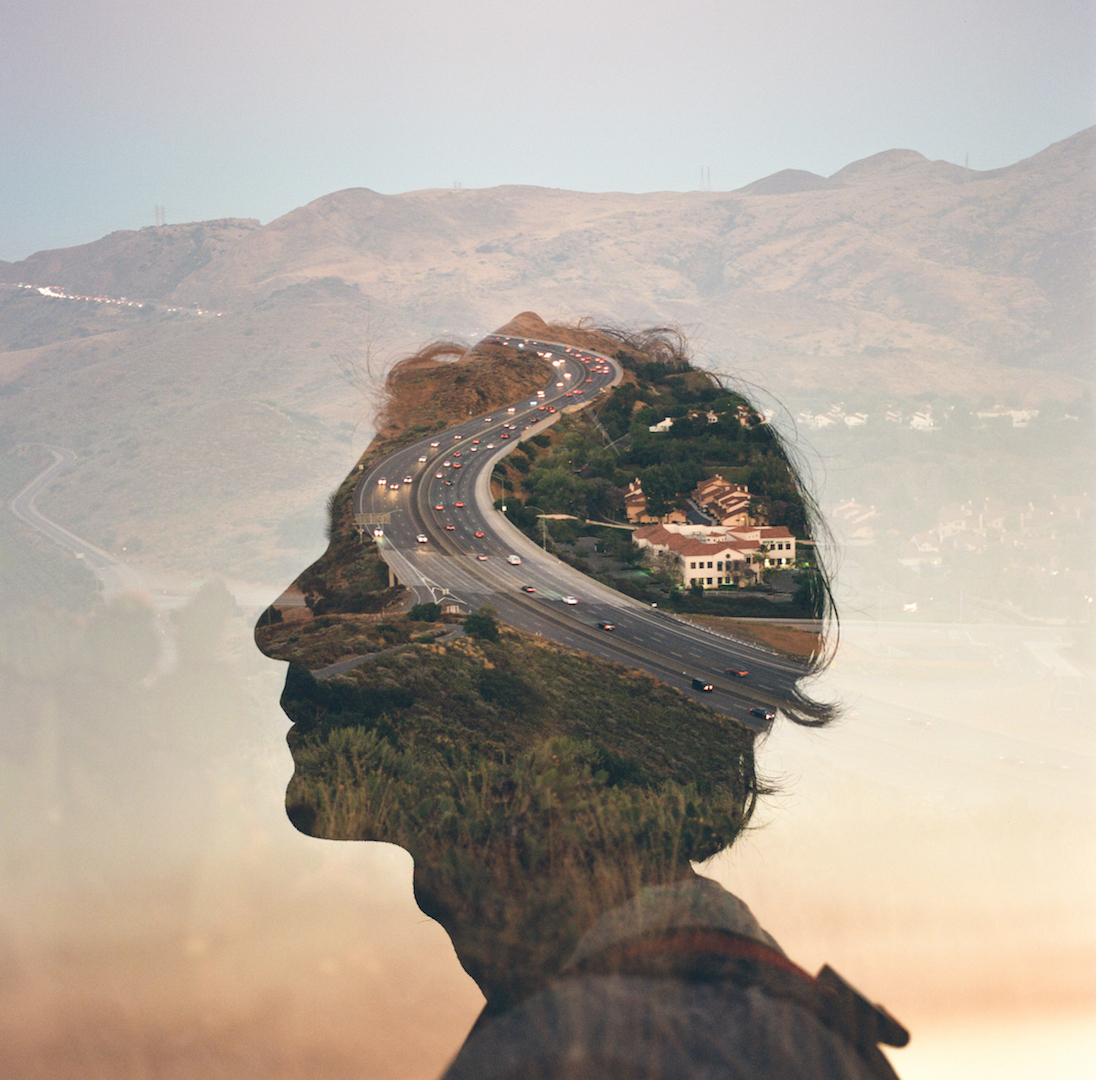 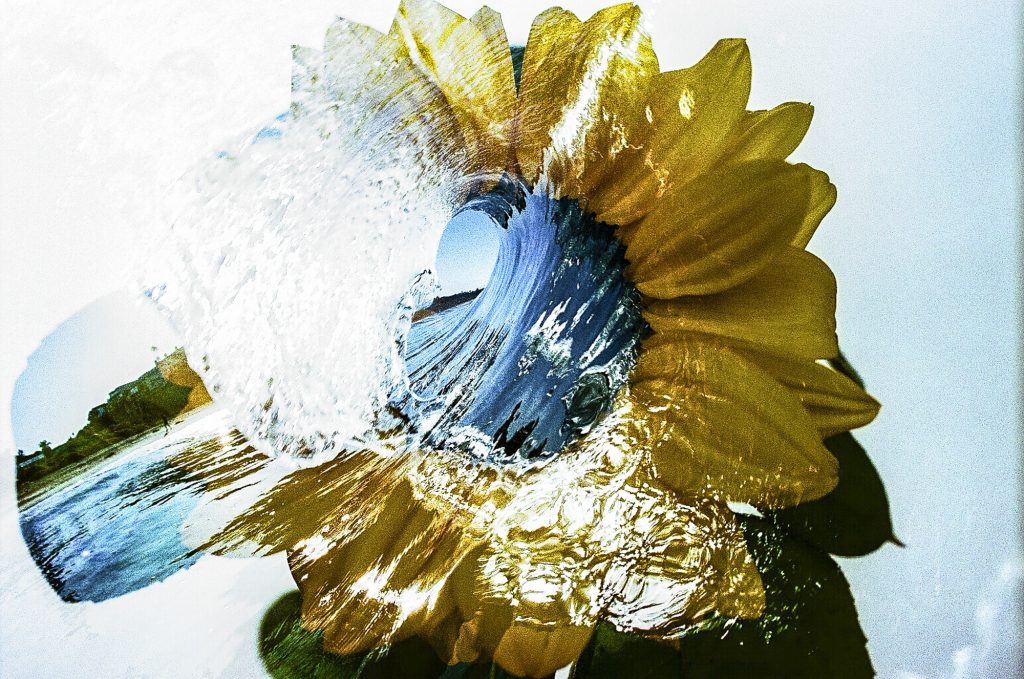 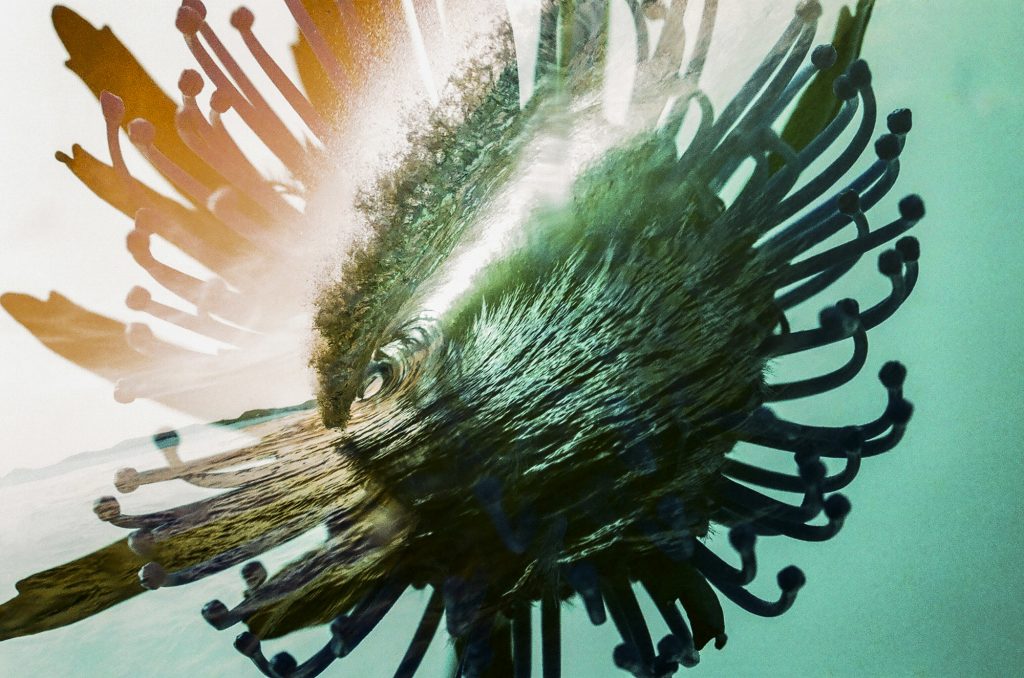 The first six double exposures were shot all with a double exposure setting but these two examples by Aaron Checkwood were shot at separate times. Meaning, he shot all the flower shots first, removed the film, then reshot all the wave shots, overlapping them. When doing this technique you need to use the same camera and pay close attention to putting the film in the same way so your frame lines match.

“Like any double exposure you want to create some dark areas so using flowers that have darker tints usually work best for me. I usually shoot the flowers first and try to blow out the background as much as possible which is insanely difficult to meter. Too shadowy on the flower and you lose the details and too exposed and you lose wave features. The other part that you have to consider is the actual wave. When I shoot in the water I use a fisheye so I’m inside the tubing part of the wave—the roundness creates shadows around the edges on the flowers and therefore you see more flower details. I used to use funky films so I could cross-process them and get weird colors, but now I want true colors so I’m sticking to Velvia 100 and pushing it a stop.” 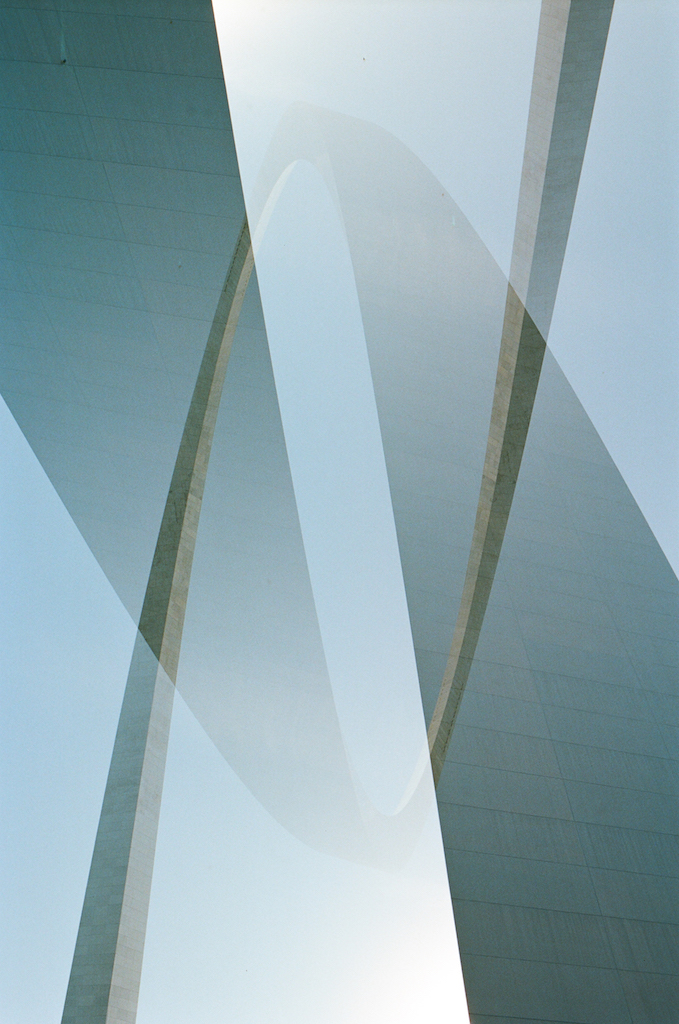 This St. Louis Arch double exposure was created by metering for the mid-tones for each shot and flipping the camera to create this abstract look. 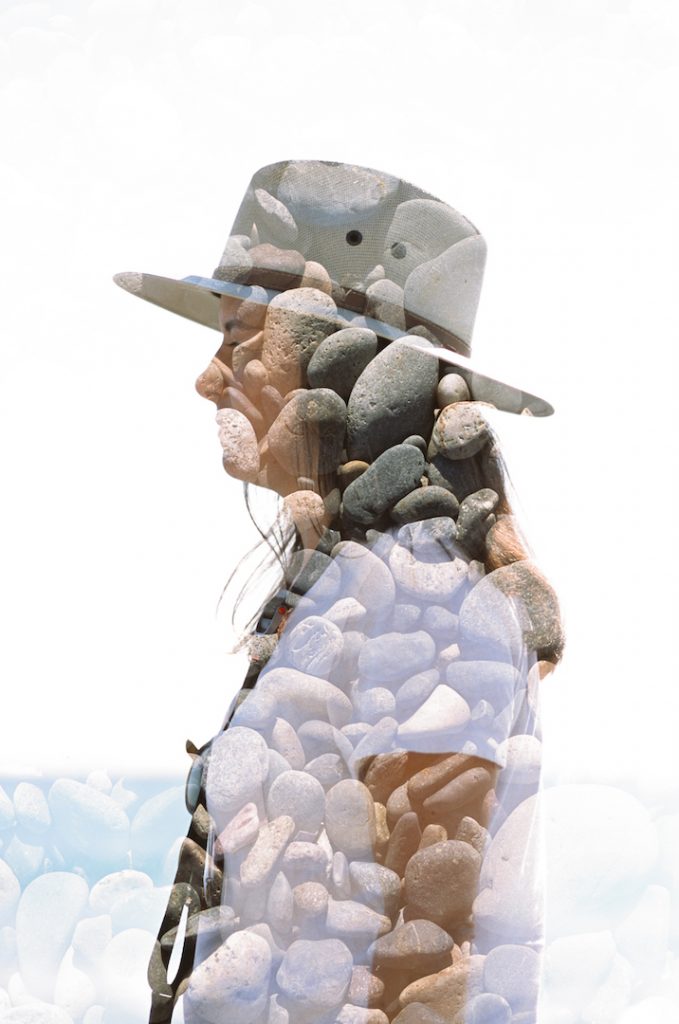 Slide film doesn’t have a lot of exposure latitude which means you need to pay close attention when metering. The first shot was the silhouette – metering for the skin tones which means the bright sky is blown out. The second shot was the rocks metered for the highlights. When these two exposures are overlapped the blown-out sky destroys the overlapping rocks but the dark part retains the images. 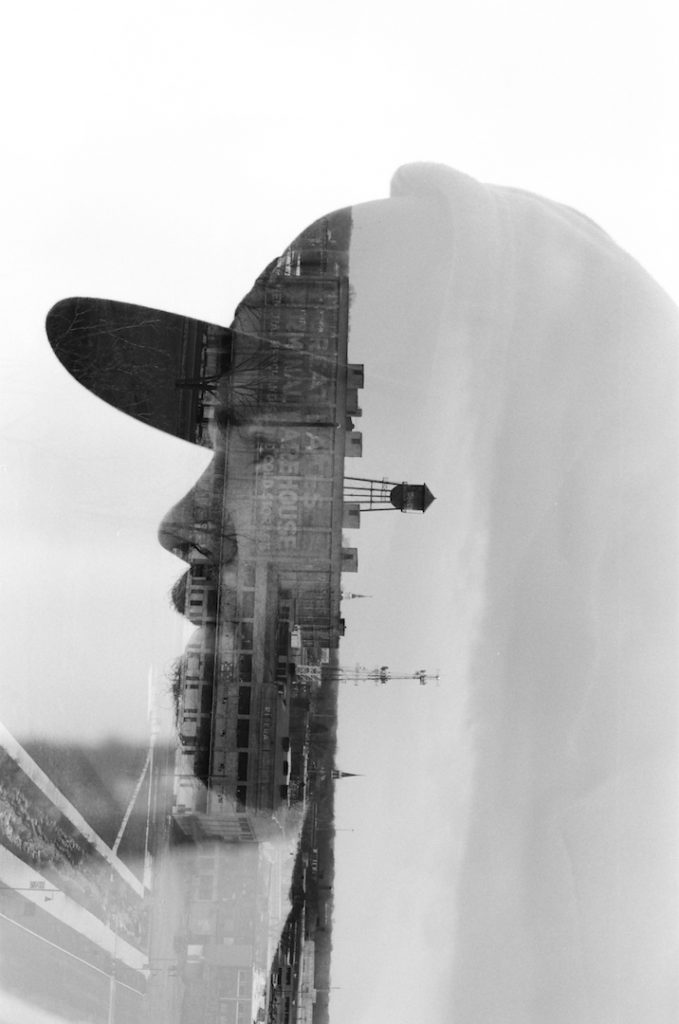 This double exposure was captured on Acros 100 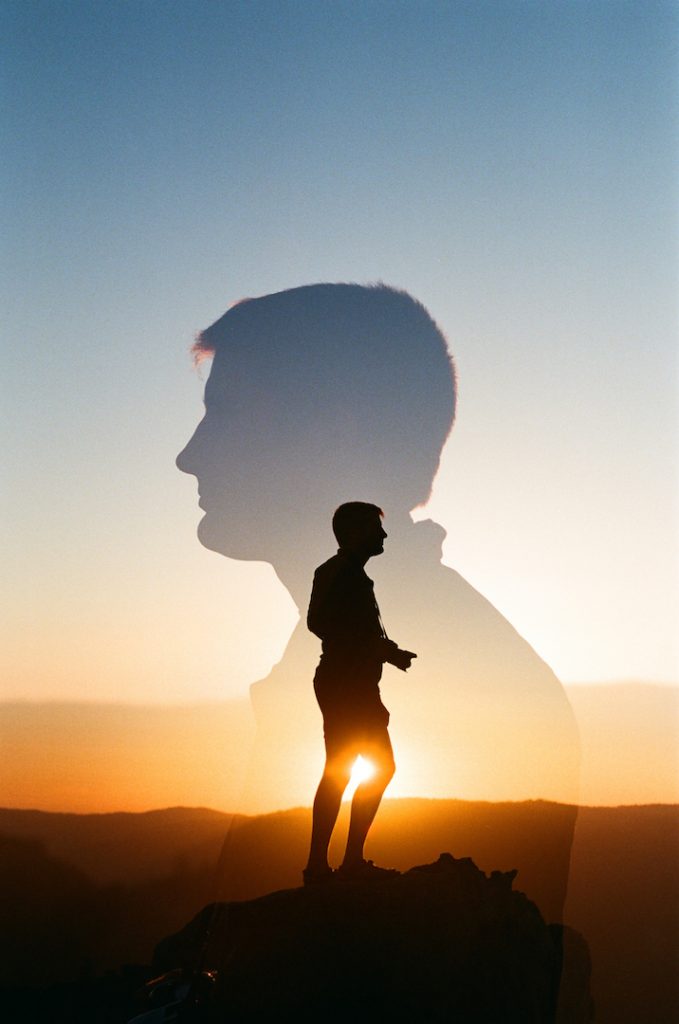 14 replies on “How to Create Double Exposures on Film”

The way to trick many cameras into doing this is without rewinding the film is to hold down the rewind button and hold the rewind lever assembly down firmly and not allow it to spin when you pull the lever to advance the film. Winding on like this resets the machanism allowing another release of the shutter but doesn’t advance the film. Then of course you have to remember to halve the stops in each shot and everything else that is so well explained in this tutorial. Thank you! 🙂

Thank you! i was looking for an information like this!

[…] Portraits layered over mountain ranges, flowers dotting the contents of a coffee cup, a cityscape rising from the ocean. The possibilities for creative captures are limitless when you dive into the world of double exposures. While they may seem intimidating at first, film double exposures are not as complicated as you may think. Here are some tips about how to capture a great double exposure on film! Credits : https://thedarkroom.com/double-exposure-a-guide-to-creating-double-exposures-on-film/ […]

Aw, this was an extremely good post. Finding the time and actual effort to produce a superb
article… but what can I say… I hesitate a lot and never
seem to get anything done.

The descriptors under each of the example DE’s are cut short meaning we can’t read the full process’s.

Are there any tricks to perfectly align the film after exposing it once and reloading? My frames are always slightly off. I’m using a Nikon F100

The f100 has a multiple exposure setting, you don’t need to trick that camera at all, there is an ME setting that can layer up to 10 frames on top of each other, maybe more, I’m not really sure, I’ve never done it.

[…] next article was posted by The Darkroom, and contained a incredibly well structured guide to double exposure film photography, including a […]

Thanks for a great post with clear info and great examples. Can’t wait to try more double exposures.

[…] are two links to sites which explain the techniques of double exposures quite well, one from thedarkroom.com (in English) and one from analoge-fotografie.net (in […]