The Canonet G-III is the third generation of Canonet, following the original Canonet and the New Canonet.

The G-III features a 40 mm f/1.7 with six elements in four groups. The integrated lightmeter provides shutter priority and manual modes. The sensor is located on the forward part of the lens, which allows the use of filters without manual compensation of exposure. The Canonet can use standard flashes or the Canonlite D which was custom-designed for the Canonet. 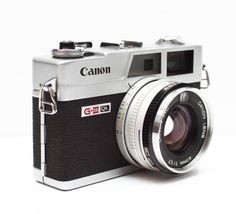 In the 1970’s the Canonet became a household name, with over a million units sold, and became one of the best-selling fixed lens rangefinders ever made.  During the 1970’s several of the great camera makers from Japan decided to try their hands at making a fixed rangefinder camera with a fast lens. Lots of them were made, and some of them were great, but none was more popular than the Canonet. The price is the real winner because the camera was very cheap when released.
The camera is well made, small, very easy to handle and has a nice bright 0.6 rangefinder. Inside the finder it is simply laid out and not overly cluttered. The meter is simple and the actions are simple too. This is a very easy camera to use, it was designed for the mass market, so there was no point in making it overly complex. Canon has never really been known as a company that makes eccentric cameras, and this one is no exception. What Canon do is make very capable cameras that everyone can use.

The Canonet QL17 (QL stand for quick load, in case you were wondering), boasts a leaf shutter, making it quiet and very stable. With a top speed of 1/500th it also offers flash sync at all speeds. This is a very good stealth camera, especially if you have the black version. It is fast, quiet and easy to stuff into a pocket at a moments notice.  This camera has an incredibly short focus action. At only 45 degrees it is almost over before it has started. I was a little bit surprised the first time that I used it and I thought it might be jammed, as I am used to a larger reach. Once you get used to this it will be an extremely fast focusing action.
Even a complete beginner will be able to pick this thing up and be shooting manually within a week. The quick load function means no fiddling about making sure that the leader is aligned with the spools correctly, just load the film to the colored tab, close the door and crank the film advance. If the advance doesn’t turn the film is not loaded, very simple. This makes changing film quick and helps to be ready for the moment.
The AE mode is well balanced and very simple to use, this makes the camera is easier to use. It is easy to switch to manual mode too and you can make the choice between the two whilst on the fly. Activating the AE lock is simply slightly depress the shutter button.

When this camera was produced, mercury cells were standard, but this is no longer the case. There are substitutes though, you can get an adapter to use modern cells or you can do what I do which is buy a Wein mercury replacement zinc air battery. The zinc air replacement means that you don’t have to have the meter adjusted and you can carry on as normal.
As this was a mass produced camera for the lower end of the market people didn’t generally look after these cameras, so you may find that your camera is battered. Things to look out for are rotten seals, broken light meter, mould and worn out rewind levers. Whilst you can have the camera repaired by a few places, they are generally so cheap that you might find it easier to just replace the camera, unless it has some kind of sentimental value.
But, if you have the black enamel version of this camera, then it would be a safe investment to make sure this thing is in working condition. The black is rare and looks fantastic. If you find one, hang on to it and take care of it, it is a beautiful camera.