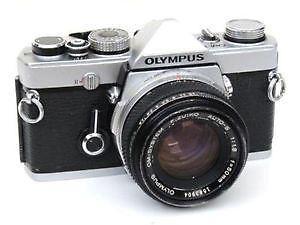 The first model was presented at photokina in Cologne in 1972 and was called the Olympus M-1. Thirteen years earlier, the release of the Nikon F had made the 35 mm SLR the standard choice for professionals accustomed to Leica and other rangefinders, but it had driven the market towards heavy and bulky cameras. The Olympus M-1 changed this and with it began a reduction of size, weight and noise of the 35 mm SLRs. It was designed by a team led by Yoshihisa Maitani, who had already created the Pen and Pen F cameras, noted for their compactness.