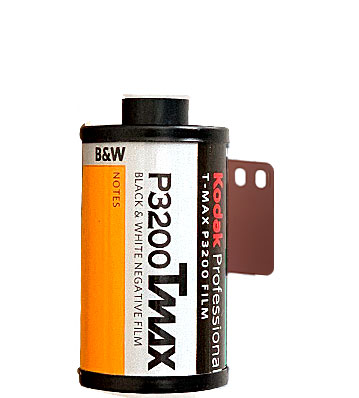 In our option, this film is the best lowlight film there is.  Its 3200 iso easily allows you to shoot handheld in most lowlight situations.   And while its a high iso film its’ grain is actually pretty fine thanks to the Kodak T-grain – when properly exposed its is less noticeable than a lot of other 400 iso film.  It has high contrast, poppy tones, and very good exposure latitude.  When shooting with this film we recommend rating it at box seed(3200) and when metering, err on over exposure, metering for the shadows.

My favorite film, use it for everything.

I love this film. I use it for everything. Day time, night time, shade, sunlight ETC. Doesnt Matter.
The real film speed is 800-1000 ISO depending on developers you use. XTOL or Tmax will give you a film speed of 1000 ISO. something like d76 will give you 800 ISO for normal speed.
Everything else above that, is PUSHING this film. It is NOT a 3200 ISO film. the P3200 stands for – PUSH UP TO 3200 ISO. You can push further, but it’ll lose shadow detail and get significantly more grain.
See Kodak’s data sheet for information.
Even in the sun, I use it, with a yellow-red filter to get into usable exposure speeds. In New England, its not super bright, so most of the time it is fine.
I have heard people complain about the highlights being blown, especially with TMAX developer. Kodak wouldn’t make a Tmax film, and a Tmax developer, and have them be unusable together, this is nonsense.
The biggest problem people have with film these days, is a lack of calibration and testing, to their supplies and their methods. You need to test a film, run different speeds for your camera, calibrate it to your enlarger, Work out max black testing in the darkroom, and then adjust your development times based on highlight printing tests, also in the darkroom. That way you know for the camera you use, to the film you use, to the developer you use, to the agitation you use, to the enlarger you use, what your EXACT film speed ratings are for your camera, development times, etc to get great prints under an enlarger.
Testing and calibrating things takes only a few hours. We didn’t jump about from film to film like folks do now, we tested and calibrated to get the BEST prints. This was 101 in the classrooms.
If you don’t do these things, don’t complain about bad pictures, blown highlights, etc on this amazing film. That is user Error, and its usually from shooting 10 different films at once, and using 40 different options for scanning, developing, etc. Which is a recipe for bad prints. this film is BEAUTIFUL, if you use it right, and know what you’re doing.
If someone doesn’t know how to do this, contact me and I will send you detailed instructions on calibrating your tools, for free, in a DM.

It may have P3200 on the box but if you check out the Kodak data sheet on it the native ISO is either 800 or 1000 depending on your preferred developer.
Dan Milnor (Shifter) on You Tube shot it for upwards of a decade and correctly emphasised that film is like a language and you have to ‘learn’ a film stock like a language, over time. Dan shot his at 1250 – I prefer 800 but either way, it can be pushed, as the P3200 on the box indicates.
It’s utterly ‘undigital’ and the look, with its grain, contrast and sharpness is glorious. Printing maybe tops out at 20 x 16 before images start falling apart and I can’t wait to get enough TMZ ‘street’ images together for a Blurb book.
Great film!

A staple b&w film but not if you're just starting out.

I realize that film is all the rage now but I might recommend learning the zone system or how to expose film properly in general, before shooting this film. To call this film too grainy (for 3200iso film) or say it’s flat just tells me you missed your exposure or tried developing this yourself with little or no experience. This film is, hands down, the best high ISO film stock out there and its latitude is amazing but MUST BE CORRECTLY DEVELOPED or you’ll walk away with a poor opinion of this film. I only wish they made it in 120 format.