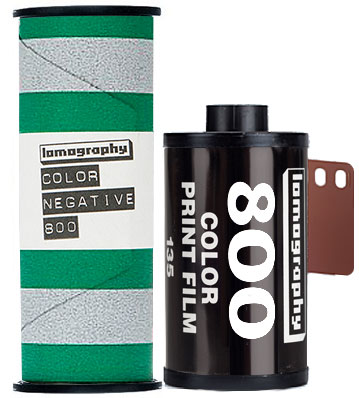 Probably our favorite Lomo film because it’s comparable to Portra 800 but much cheaper.  This high speed color negative film is great for lowlight shooting but still preforms well for daylight shooting as well.  Its grain is very noticeable but looks really good!  It has mild saturation and contrast.

Really loved this film, the colors are beautiful and rich, shot my photos with the Holga 120N and was very surprised by the results!

I honestly just got this film to try out all of the high speed options that still exist, but boy am I glad I did. This legitimately might be my new favorite film stock. I love the versatility of being able to use it in almost in condition with great results. I’ve only had one issue with this film, and it’s not even in all of my shots, but it’s something to mention at least. Sometimes when shooting early in the morning (pre/during sunrise), I’ve gotten a fairly strong green cast in my shot. It’s never been anything I haven’t been able to edit out, but it has happened. I’ve also noticed that it doesn’t usually happen with my SLR, but the couple times I’ve shot it in my Point and Shoot it has, so it could be something with over/underexposure, I’m not sure. Overall, I would still give this film a 9/10, I absolutely love it.

I guess if you like prints that look they they are 50+ years old and faded, this is your film. I shot 2 rolls, had them processed by 2 different places and got the same results. Every photo had a gold/yellow cast. Deep dark ocean blue looked green. Every image had a vintage look, which is OK if that’s what you want. I have one roll left that will probably spend the rest of its life in the refrigerator sadly waiting for me and a desperate moment when I need a roll of film and it’s the only one available.