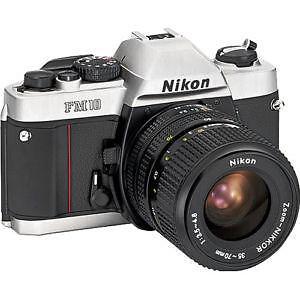 The Nikon FM is a mechanically operated, interchangeable lens, 35 mm film, single-lens reflex (SLR) camera. It was manufactured in Japan between 1977 and 1982 by Nippon Kogaku K. K.

The FM, introduced in 1977, was a mechanical manual camera with a built in three LED + 0 – meter similar to the F2AS. (Most people consider the F2AS to be the very best serious 35mm camera ever made by anyone; it has the most sensitive meter ever made by Nikon, but I digress.) People didn’t take the FM very seriously compared to the F2 back then. That was too bad because the only things the F2 did that made it different were features that no one uses anyway like interchangeable screens, interchangeable prisms and 250 exposure film backs. The FM has a 1-1,000 shutter and 1/125 flash sync.