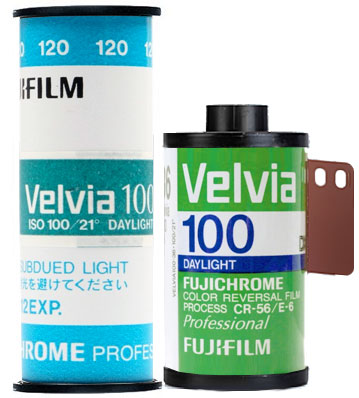 If you’re looking for the vibrant saturated color we recommend Velvia 100 which is known for its poppy color and higher contrast.  This film have very sharp and barely noticeable grain and ideal deal for daylight shooting and landscapes.

Years ago, I worked as a park ranger in the Resource Management Department and discovered Fuji Velvia slide film. My responsibilities included a lot of work documenting wildlife and projects involving wildlife. Our go to film was Kodak Kodachrome 64; this changed when we found that Fuji Velvia films yielded more accurate color. I had submitted a Kodachrome 64 slide of an elk to a professional photo lab for printing and received a call from a lab tech. She asked me if we really wanted a print of a ‘pink’ elk or if we would like to have the lab correct the color issue. During the course of our conversation, she recommended that we start using Fuji Velvia E-6 films.
I took the advice of the lab technician as I pursued personal wildlife photography. While most of my work now involves capturing images of marine wildlife with digital SLR cameras, I do maintain a housed film DSLR system and several Nikonos film cameras. Fuji 100 is my preferred film because it can be pushed to ISO’s of 200 and 400 for underwater work.
The white shark photographs I’ve submitted to the image samples section were captured at ISO 200 with a housed Nikon N8008s. The sea lion photographs were done with a Nikon F-3 at ISO 100 and are included in my soon-to-be-published book, Dancing with Sea Lions. Interestingly, my publishing editor easily picked the Fuji Velvia 100 images from the digital images.
Fuji Velvia 100 is a great film if you want images with some ‘pop’!
Philip Bonds
Cortez Blue Photography